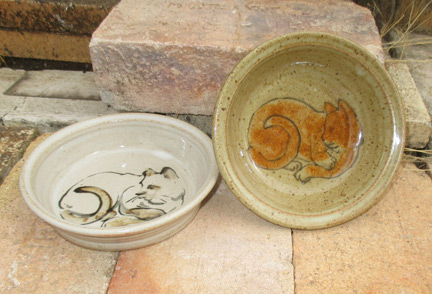 I didn't set out to be a cat person. I always thought I'd have a dog, something medium-sized, like a beagle. I like beagles.

But I married into a cat family. Initially, it was one kitty, a New England polydactyl named Polly. (Not my fault. Talk to Denise.) She was a shy thing, deeply suspicious of men, until she realized that I liked cooking real food. Involving raw meat. And could be convinced to drop bits of fat or chicken skin in her food dish. All she had to do was wait in ambush in the kitchen and rub against my ankles. Men are such softies.

Twenty years later, we've had eight more cats around the house, at one time or another. Currently, there's two, a ginger tiger tom and his calico (well, tuxedo plus tortoise-shell) sister. Neither of them are shy. One of them is flopped over the keyboard as I type this. I just keep my mouth shut and put down the food dishes...

Cats are way too cool for clever sayings. Our Cat Food Bowls are painted with a kitties in a wild variety of patterns and poses. 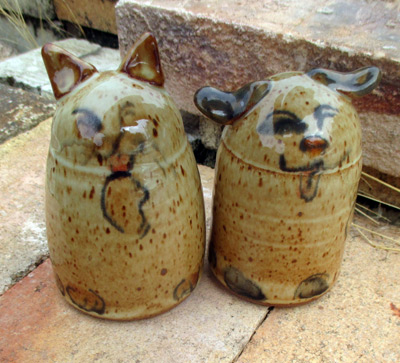 They started as an experiment. Could I make a cat or dog bank that took less time? So many small parts: Eyes, nose, muzzle, ears, all the paws and a tail besides. Pink tongue. I just couldn't, anymore.

So I experimented with painting on features. The ears still needed to be sculpted on, but everything else: painted. I wasn't sure it worked at bank size, but down at the micro-level, it was great.

My Salt and Pupper Shakers are sold individually, so you can buy a cat, a dog, one of each or two of a kind. The cats are all blue or seal-point Siamese, the dogs some variety of black or brown-tick (spotted) hound. With an itchy ear, because, you know, hounds.