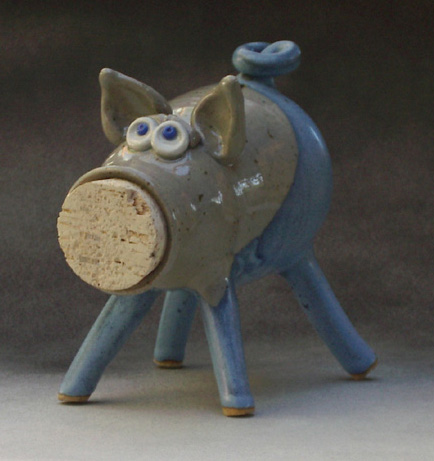 I had a piggy bank as a kid. It was white, with flowers painted on its belly, a rubber stopper underneath, so I could take out the coins and count them from time to time. Not that there was much in it, mind you. Except for First Communion or Confirmation, we weren't on a cash economy, back there on the farm. (And allowances were what happened to town kids...)

I always suspected it was a girl pig--it had a flower behind its ear. And though my big brother's pig had flowers painted on it too, his had one of those New York cabbie hats, yellow, on its head. Always found that vaguely dissatisfying.

So when I started making my own piggy banks, I did no flowers whatsoever. Just a wheel-thrown body, handle-pulled legs and ears and tail, porcelain eyes. Oh, and the cork moved from the belly up to the mouth, gave that flat-nose pig snout look.

After the pigs, I tried elephant banks, also thrown like bottles on the wheel, then tipped 90°, with the legs and ears and tusks added later. The first ones were not entirely functional; I'd neglected to include the cork hole, so you had to do the butter-knife-in-the-coin-slot thing. I had to sell them off as Savings and Loans: You could put your money in but you couldn't get it out again. Since then all of my banks have had no penalty withdrawal systems. 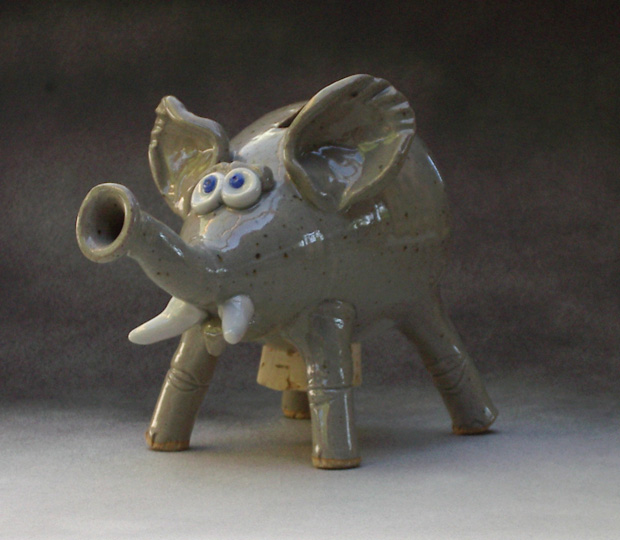 In their heyday, I had some 25 or 30 different styles on banks on the shelf. Some are still boxed up in my shed, waiting for the person who can't live without a walrus or beaver bank. In the meantime, I've slimmed down the regular line-up to eight or so. It's kind of a mass extinction, though oddly enough, this time the dinosaurs survived.

Our banks have wheel-thrown bodies, with handbuilt features added when they're partially dried ("leather-hard"). All feature a coin slot on top and a no-penalty withdrawal system (okay, a cork or rubber stopper) for easy liquidity. 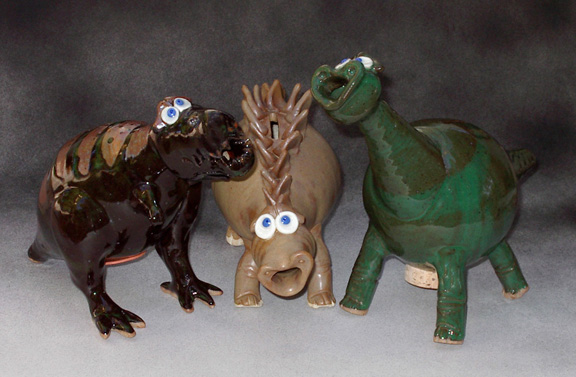 Regular bank patterns include classic Piggy banks, Elephants, Cats (in two tiger patterns: Cobalt blue on white and Rutile Gold on white), Chickens (for your nest egg), Frogs (because they make people hoppy), and for those inheriting old money, Tyrannosaurs, Stegosaurs and Brontosaurs. Yes, I know, the official name is "apatosaur." But which would you rather be, a "long neck" or a "thunder lizard?" I rest my case.

Other animals may be special-ordered, price quoted on request. I've made an opposum (with prehensile tail curled around her kit), armadillo, even a giraffe. The price for a special order will vary with its complexity; the giraffe, with wheel-thrown neck, body, and all four legs cost about twice the usual bank fee. But it was awfully cute. One thing about special orders--they can't be done fast. Depending on where in my firing cycle I am it can be as little as two or as much as six weeks before they're ready. Just so you know.