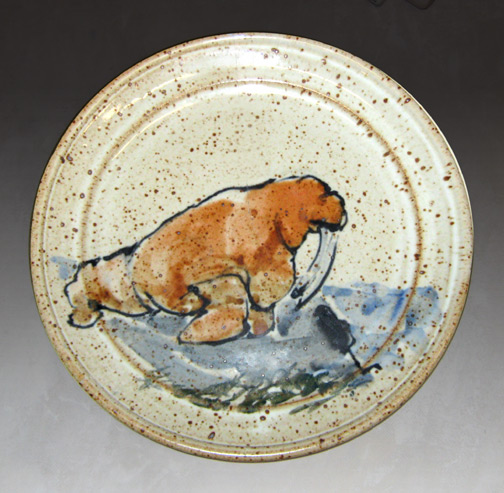 They're not the sort of thing you'd find while walleye fishing in Wisconsin, nor even crabbing on the Oregon Coast. But they fascinated me when I was a kid.

I'm not sure why--I don't think it had anything to do with the Wally Walrus character on the Woody Woodpecker show. Maybe it was the whiskers. Maybe the tusks. Okay, probably the tusks. I'm sure I'd never heard about the oosik at that age--and if you don't know what that is, you'll have to look it up on Wikipedia, I'd blush if I tried to explain.

In any event, when we did a class project on Alaska in the second grade, I reported on walrus. I even wrote a poem:
The Walrus, the walrus--
He's bigger than all of us.
(Okay, not a good poem. Second grade, remember?) I carved one out of soap. (Ivory, appropriately enough.)

And I keep painting them on pots, dessert plates, mostly. They still fascinate me. And I think I finally know why.

I picked up a book recently called Neptune's Ark. It's by one of my favorite natural history writers, David Rains Wallace, who also wrote The Klamath Knot and The Turquoise Dragon, two books set in Southern Oregon.

Neptune's Ark casts a wider net. It's about the paleontological history of the Pacific Ocean along the west coast of North America. He talks about the fossil record and about marine dinosaurs, birds and mammals. Interestingly enough, all of the marine mammals we know today evolved from terrestrial ancestors. Whales descended from ancient ungulates, hoofed mammals. Sirenians (dugongs and manatees) have ancestry in common with elephants. Pinnipeds--seals and sea lions--seem to be related to the canines.