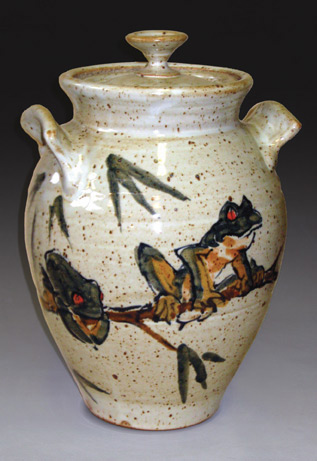 I spent the first two summers after grad school teaching at an arts camp in Connecticut. They'd got my vita through the College Art Association offices in New York City, where I'd hoped to interest a college ceramics program, but had also admitted to experience in children's storytelling, music and radio. So one day, out of the blue I got a phone call from Buck's Rock, asking if I wanted to come back east for the summer.

It was a pretty amazing experience. They taught kids ages 9 and up everything from painting and printmaking to ceramics and glassblowing. There was a wood shop, a photography shop, a jewelry shop, letter press printing, silkscreen and batik. Not to mention performing arts: chorus, band, theatre and clowning. A garden, a farm (with a conveniently timed pregnant heifer, so the kids got to see a calf born every year). I had a great two summers there, might have even come back for a third if I hadn't been busy getting married in Wisconsin.

We were pretty far back in the woods of western Connecticut, and the wildlife was amazing. I saw luna moths for the first time while I was there, and deer occasionally, early in the morning. We had a skunk that used to lurk around the premises, which inspired the theatre people to build a skunk puppet and terrorize the counselors late at night on the payphones.

What we had most of was tree frogs, little spring peepers, tinier than a nine-year-old's thumb, green and brown. The nine-year-old in question was named Sara, "Little Sara," to differentiate her from "Big Sara" who headed the ceramics studio that year. She showed up in the shop one morning with a shoebox under her arm and proceeded to show us a dozen or more tiny tree frogs. She was convinced they were babies, and had been collecting them to keep them safe from harm. It took us some talking to convince her that they were capable adults; futhermore, that they'd dry out and die if she didn't let them go.

The tree frogs I paint on my cookie jars, tall mugs, pasta bowls and bakers are a little flashier than spring peepers--I think the original calendar photo I use for reference was taken in Central America. But I can't paint them without remembering a nine-year-old girl with a box full of wonder.