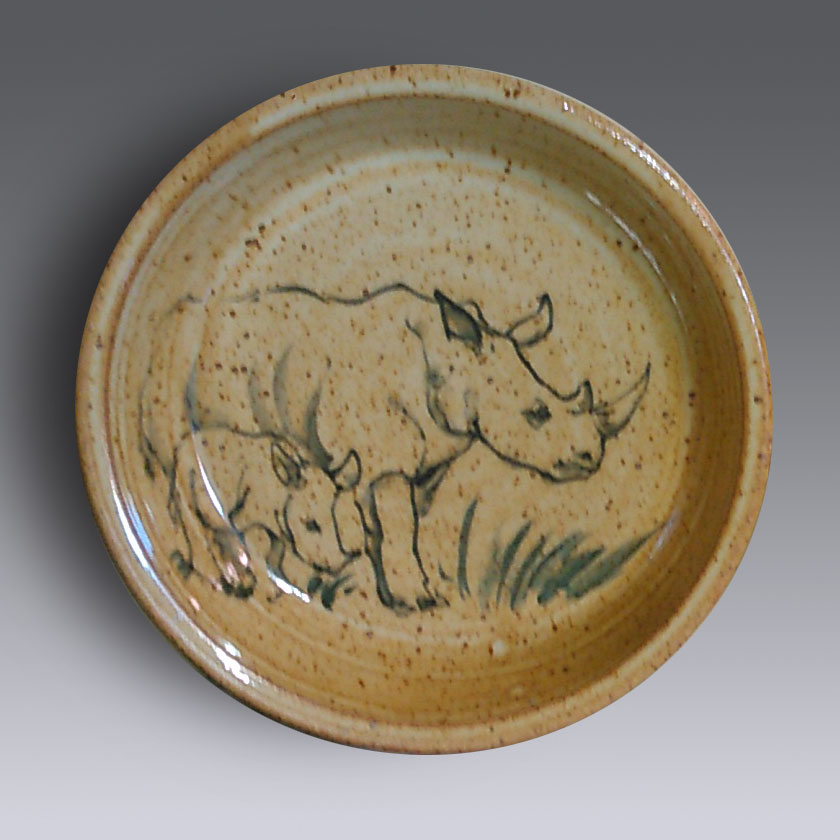 I generally don't paint mythical creatures on my pottery. Dragons, mermaids, fairies: there's lots of people who do that kind of imagery. I stick to what I can see, photograph. Which now, I guess, includes unicorns.

After all, all those creatures you know came about from transcription and translation errors from copying Greco-Roman sources (who themselves got them from travelers’ tales from Persia and India). Tiger becomes manticore, python, dragon. Rhinoceros is a unicorn.

One of the other potters at Club Mud has two little boys, who frequently join him when he comes to to load a kiln. They're nice kids, not too rambunctious, and will usually sit in the yard, or play with some clay while he works. If I'm glazing, they may stop in a watch for a bit, which I never mind. Once, when I was glazing, younger brother asked if I ever did a rhinoceros, which I hadn't, at the time. I tried one later, glazing Empty Bowls, and it was kind of fun. I made a mental note to come back to it one day.

Fast forward a couple of years. My sister, the new-age banker, had a request: could I do a rhinoceros pie plate for her friend? The rhinoceros was her primary power animal, specifically a female rhino named Wamatumi.

I'm always up for a new challenge. Also? If it had to be a female rhino, that meant I could paint a baby rhino alongside her. Baby rhino? How could I resist?

So I jumped right in. Did a pie plate. Dessert plate. Two tall mugs. A rhino-sized serving bowl. I even got inspired to do a new tiled mirror project, African animals, including lions, a hippo, my favorite baby elephant, and, of course, rhinos.