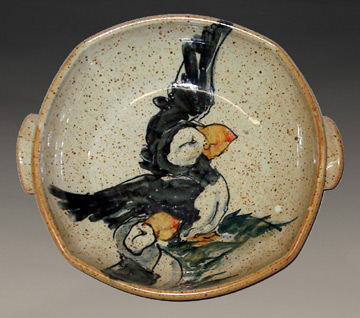 It was all about the whale, originally.

The first time Denise and I visited the Oregon Coast Aquarium was to see Keiko, the Free Willy orca, rescued from a Mexican marine park and brought to Oregon for rehabilitation. And he was impressive--imagine a black and white creature the size of a mini-bus, floating outside your picture window--but there was so much more.

Otters splashing and playing, mugging for the tourists. Seals and sea lions, sinuous and graceful swimmers. Oddities of sea and surf and tidepool. And birds...

The Aquarium has a walk-through aviary, populated with oystercatchers and shags, guillemots, auklets, and my personal favorites, puffins.

Puffins look hilarious in the air, heavy-bodied, short-winged. They fly with the awkward jerkiness of a mechanical bat in a Hammer Films Dracula epic. But under water, those short wings are perfect for propelling them in pursuit of fish. They swoop and glide, graceful as a real bat in a swarm of mosquitoes.

We have tufted puffins on the Oregon coast; clown puffins, with their Pagliacci markings, are found further north in Washington. I draw them perched on serving bowls, bakers, pie dishes and tall mugs.

But in my memory, they glide...