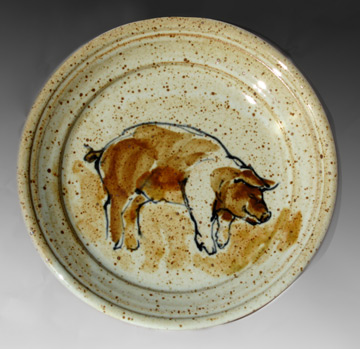 The farm I grew up on in Wisconsin was what the experts would call a "diversified dairy" operation. We milked thirty head of cattle and sold the milk to the local cooperative cheese factory for our cash income.

But we also had four or five pigs, a couple hundred chickens, three big gardens and an apple orchard. Very little of which--aside from feeder pig sales and my mother's egg money--was part of the cash economy. When you have six kids and three adults to feed, you grow as much of your own food as you possibly can.

So we ate of lot of eggs--and chicken. Dad butchered his own beef and pork and venison, made ham and bacon and sausages. We drank our own milk and cream, and canned sweetcorn and green beans and tomato juice and applesauce. We stored potatoes in the basement and winter squash on the stairway landing, and Mom baked a dozen loaves of bread every week.

Everybody had chores. Some things we did together: planting the garden, getting in hay. Other chores were divided up. Tony and Donna did the milking. John washed up milking machines and fed calves. And I wound up with the pigs and chickens.

I don't have much to say about chickens. Folksinger Greg Brown calls them a vegetable that walks, and I can't dispute that. Roosters can be vicious and vindictive, but most hens don't have much interest in anything beyond the next bug.

Pigs are different, pigs have character. Baby piglets are adorable, velvet-furred, but you don't dare pick one up, because they have a squeal that puts a smoke detector to shame, and shortly thereafter the sow will try to come over the side of the pen and eat you. Mother lions have nothing on pigs when protecting their young.

Feeder pigs are too smart by half. They travel in packs, will squirt right through an electric fence, and are happy to take your garden patch back to plowed earth. They're also lightning fast, turn on a dime, and don't particularly like being herded back out of the garden and into their own pasture.

Adult pigs are somnolence personified. They snooze in a cool wallow, grunting contentedly in their sleep, but will stir themselves to come up to the fence to have their back scratched with a two-by-four. They also love apples, and will pass up a full trough of pig feed for a couple of handfuls of windfalls.

I have fond memories of pigs, and still visit the hog barn at the county fair. And I paint them on dessert plates, and the occasional pie dish.

For pork pies, of course.