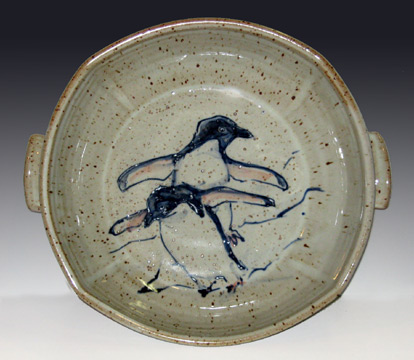 I was a voracious reader as a kid. Mysteries, biographies, humor, even science fiction—I remember reading Heinlein's Rocket Ship Galileo in the second grade. Bits and pieces stick with me, most is long gone, but some books led to a lifelong fascination. Such as Mr. Popper's Penguins.

It's a silly little story, with a penguin sleeping in the icebox, Mrs. Popper playing the piano with fingerless gloves, a dancing penguin revue, a heroic Arctic explorer and an everyday fellow who dreams of being just like him. It's still in print, look it up sometime.

It sent me to the natural history stacks to read everything I could about penguins.

They're fascinating critters, flightless birds that fly underwater, found wherever cold water and abundant fish occur in the Southern hemisphere. They live as far north as equitorial Ecuador, following the cold Humboldt current. Antarctic penguins get the best press, though: Emperors, hunkering down in the midst of the polar winter, incubating eggs atop their feet, warmed by a roll of belly fat. And my favorite, the Adelie.

Partly, it's the tux, the waddling gait, the tendency to flop over and toboggan just for the sheer fun of it. Mostly, though, it's the romance. Even as an icky-girl-hating third grader, I still had to go, "Awwww."

Adelies give gifts, you see. The male will comb the gravelly shoreline for just the perfect pebble for his intended. Competition is fierce; males steal each other's pebbles. Eventually, our beau will pick up his pebble and carry back to his girl in the rookery, presenting it to her with great ceremony.

If she thinks he's an insensitive lunk who just grabbed up any old pebble in the checkout line at IceMart, she'll brush it aside and leave him heartbroken. Or dashing back to the beach to find a better pebble. On the other hand, if he's found a gem among pebbles in her estimation, she'll accept it with grave courtesy and incorporate it into the nest she's building, and it's wedding time. After all, they're both already in formal wear...

See? Penguins make me silly. Which is why I paint Emperors on tall mugs and dessert plates, Adelies on dessert plates and bakers and serving bowls.