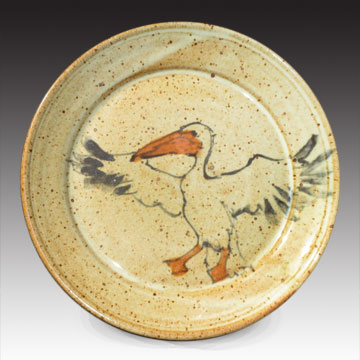 It was an unexpected sight.

I was on the back deck at Denise's aunt's lake house, on Little Lake Butte des Morts in Wisconsin. I'm used to seeing gulls overhead, thousands of miles from the ocean--the Great Lakes aren't so far off, after all. This bird seemed much bigger, though, white with black flight feathers. Snow goose? Neck seemed wrong, the beak... no, it couldn't be, could it?

It was, in fact, a pelican. I saw a much bigger flock of them close up in the rapids of the Wisconsin River in downtown Neenah. I've since spotted them in the prairie potholes (seasonal wetlands in the Great Plains) of North Dakota, and scattered across bits of Eastern Washington. White pelicans are much more than a shore bird. In fact, the only place I've yet to see them is on the Oregon Coast.

I started painting them this summer, on dessert plates and tall mugs; we'll have to see how they do before I try them on other pots. But if I wanted to try a new, dramatic bird pattern on my pottery...

They fill the bill.