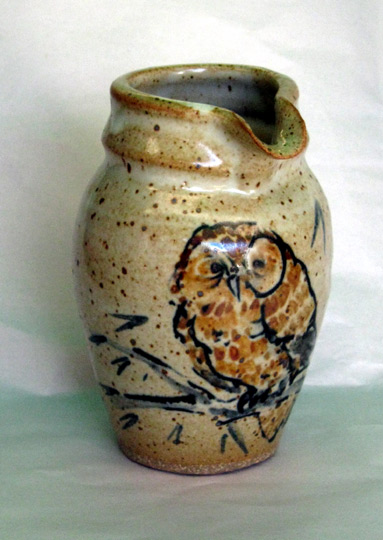 When I was a kid, every once in a while, an owl would take up residence in our barn, up in the hay mow (rhymes with "cow," what you say in Wisconsin when you mean "hayloft"). It was usually a screech owl--a tiny little bird with huge eyes and an oversize head that it could turn almost all the way around before snapping back forwards in an unsettlingly Exorcist fashion. Once it was even a barn owl, hooded, pale and ghostly. I found them fascinating.

My dad was always insistent that we not bother them. We could look--once--but after that, we had to leave them alone. They caught mice and sparrows and other critters that might eat or foul the hay, so he was happy to see one visit. They'd usually stay a week or so, cleaning out the rodent population before leaving again.

I wonder what my Dad would have made of the owl controversy here in Oregon... Northern Spotted Owls, of course. They live in old growth forests, so they're an indicator species for environmental health. As a result, they've been a bone of contention between conservation and logging interests for as long as I've lived here. And now they're getting even more pressure, not only from habitat loss, but from other owls. The barred owl seems to be moving up from California into former spotted owl habitat, and if that isn't a metaphor, I don't know what is.

So between my dad's influence and my conservationist tendencies, I find myself painting spotted owls all over my pottery. They've been spotted on dinner and dessert plates, pie dishes, pitchers, cookie jars and tall mugs.

After all, painting owls is a hoot...