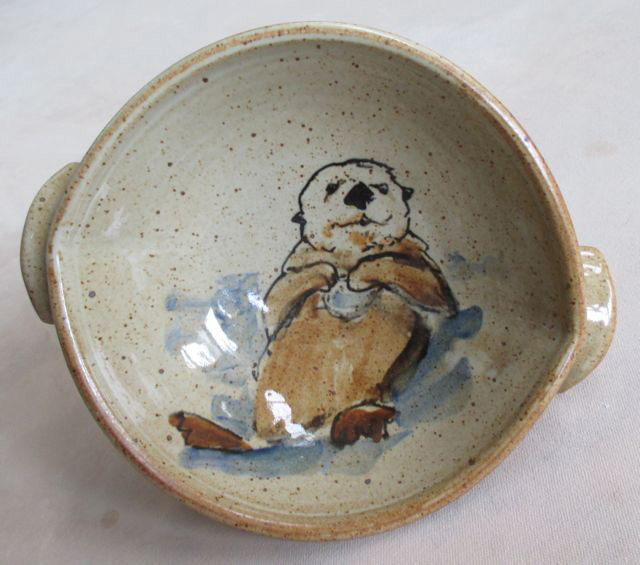 (I recently revisited the Sea Otter pattern, updating it for a special order after a long hiatus.)

I saw my first wild Sea Otter in 1985, en route from Wisconsin to graduate school in Oregon. Okay, it wasn't a direct route. I'd taken a couple of extra weeks to go sight-seeing, and spent a few days visiting an old college friend in San Francisco. She directed me down to Half Moon Bay, and to Point Diablo Park in Monterey where I stood on a gravel beach and watched an otter do the abalone-and-rock trick on his stomach not ten yards off-shore. Amazing.

I also have enjoyed visits to the sea otters residing at the Oregon Coast Aquarium, particularly Cody, an orphan rescued from Prince William Sound. He played with his food like a cat, tossing and catching ice cakes with shrimp and crab bits frozen in, banging them on his belly and doing barrel rolls for the sheer joy of it. Once he had a little too much fun: he'd pried loose a bolt cover from the water filter at the bottom of the pool and was banging like a three-year old on any available surface. One of which was the plate glass panel of the otter exhibit. Fortunately, it was safety glass, so gave way with a "plink" and shower of glass fragments, rather than a giant "ploosh!"

So you can see why I love painting otters on p-otter-y. You'll find them at play on bakers, pie dishes, dinner and dessert plates, and whatever else seems to need a playful touch.

Just don't bang your shellfish against your plate, okay?