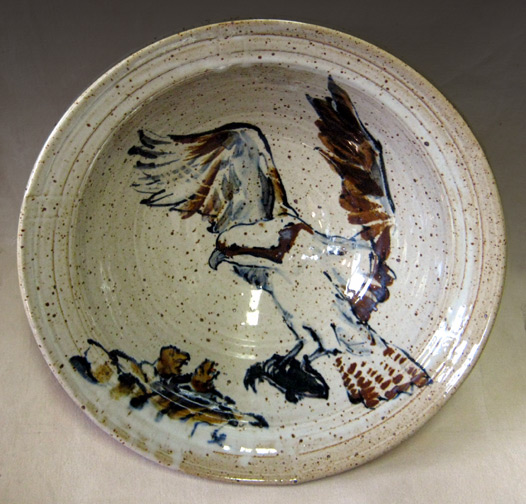 Osprey Can You See?

My route home from Club Mud is long and tangled: past the University of Oregon (and their giant new silver flying-saucer basketball arena), through downtown, up the on-ramp to I-105, a quick loop-around and off again by Valley River Center and onto Delta Highway, then Beltline, then up River Road to home.

The first half isn't too scenic, if you're not into giant aluminum buildings, but the 105/Delta loop is in a crook of the Willamette River, and the highway itself parallels Delta Ponds Park, home to ducks, geese, the occasional beaver, a heron rookery and a surprising number of cormorants. It's rare not to see at least some wildlife or birds as I pass.

The streetlights by Valley River Center are monsters, poles towering fifty feet or more before ending in a shallow domed top and six branching lights. (To me they look like Martian battle machines from War of the Worlds.) I couldn't help but notice though, the last time I came through, that one of them seemed to be wearing a hat. I got a better look as I looped around the exit, and saw that it was actually a platform of sticks, woven together into a basket. An osprey nest.

Ospreys, sometimes called fish hawks, are surprisingly casual about proximity to humans. I've seen one nesting on a platform near the I-5 bridge, another just off Highway 126 at Fern Ridge Reservoir. Give them fresh water, fish to catch and a dead tree to nest in and they're happy. Or an electric pole, abandoned industrial chimney, or the top of a highway streetlight.

They're gorgeous birds, mostly white below, chocolate eye line and wing and tail bars. I've watched a few of them circling the reservoirs east of Eugene, and once was lucky enough to see one striking for a fish on the Willamette, as my car went over the I-5 bridge. Caught it, too.

But it didn't occur to me to paint one until someone commented how nice they'd look on a tall mug. So I tried a few, on tall mug, serving bowl and square baker. They're quite striking.

But I'd better keep them away from the salmon mugs...