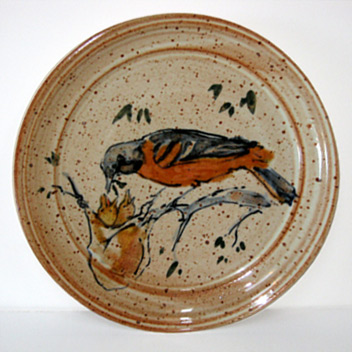 Sometime back in college art history, I came across the term "oriel window." I've long since forgotten the definition, but the term itself stuck with me, because I once had an oriole window, as a kid.

John and Tony and I shared the upstairs back bedroom for many years, the least coveted one in the house. It faced west, so was blazing hot in summer, icy in winter--more than once I woke up to find frost on the ceiling above my head. It was also inconvenient, because to get to the hallway and stairs, you had to go through the front bedroom, which was occupied by my sisters, Donna and Maggie.

It had one compensation, though. Grandpa Gosar planted elm trees behind the house, and every spring a pair of Baltimore Orioles would build their nest not six feet from our window. We'd watch them weave together the classic nest, grey and pendulous, vaguely reminiscent of a Holstein's udder. They'd hatch out, feed and fledge two or three nestlings a year, oblivious to the fascinated audience of little boys on the other side of the window screen.

Sadly, the trees succumbed to Dutch Elm Disease when I was in High School, and we didn't see orioles for a long time afterwards. I'm happy to report, however, that they're once again on the home farm. They nest in the Horse Chestnut now, and my mother sees them regularly at her bird feeder, which she has fitted out with a jar lid attached to the roof that she keeps filled with strawberry jam, just for them. It gets particularly comic late in summer, when the parents start bringing the newly flying youngsters down to get their own jam. Despite their parents' instruction and example, they still manage to miss their landing and skid right over the bird feeder roof two times out of three. They'll flap their way back into the chestnut, perch for a while until they're over their embarrassment, then try all over again.

I don't paint a lot of oriole pots, mostly dessert plates, pies and the occasional casserole, but I do try to jam a few into every firing.