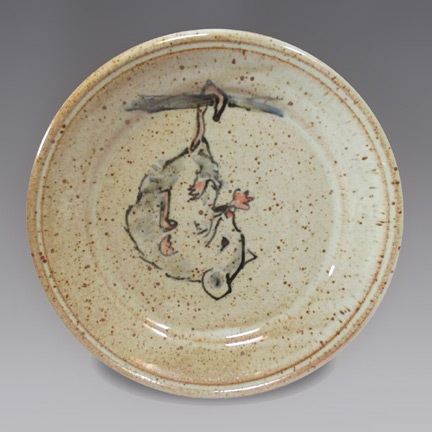 I've had a lot of memorable animal experiences over the years. Squirrels in the attic. Racoons in the carport. Bats on the landing, cats in the studio, elk in the headlights. None of them were quite as heart-stoppingly startling as this.

I was down at Club Mud early that day--not oh-dark-firing-a-kiln early, I remember the sun was already up. I must have been on the final glazing run before firing the big kiln, so came in around 7 am.

We call it a kitchen; it's really a wide spot in the hall-way, home to some quarter-space shelves, a fridge, and a small cabinet, atop which stand a yard-sale microwave and toaster oven. (We used to have a coffee-maker, but it kept blowing the circuit breaker, so now the caffiends walk over to Dutch Brothers.) Oh, and a waste-basket, which usually holds junk from the glaze-mixing room, but occasionally also orange peel or apple cores.

On this morning, it also held three unhappy baby opossums. They'd gotten into the studio somehow, probably through one of the ventilation bricks in the cinder block wall, climbed into the waste basket following the scent of food, and couldn't get out again.

Have you seen an opossum? Spiky hair, ratty tail, more teeth than you'd credit, especially when three of them are hissing angrily at the big-faced human staring down at them. They're also unexpectedly cute, in a pink-nosed, Jurassic muppet fashion.

I treated them rather like I'd once treated the bat. First I put on leather welding gloves, then I gingerly picked up the basket, took it outside and tipped it over on its side. A few minutes later they'd scrambled for cover, presumably to be reunited with a worried mother too large to get through the wall. I put away the wastebasket and, for the heck of it, painted a possum on an Empty Bowls contribution later that day.

Fast-forward several years, and I run into the person who'd bought that opossum bowl, recently broke it, and wondered if I'd ever do another. I say sure, but then think, Empty Bowls are my test pots for new forms and patterns. Why not make more?

So far, I've only done a couple of dessert plates, but they're adorable. If customers agree, opossums may be showing up on pie plates, bakers, maybe a serving bowl or two.