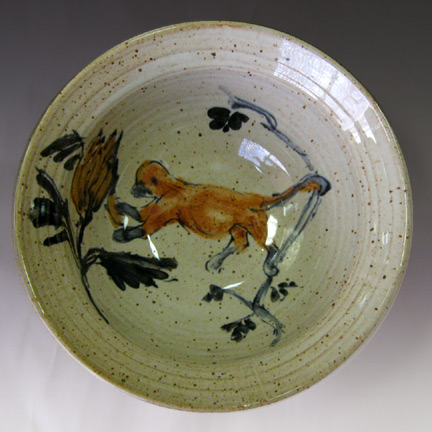 I'm not sure why I started painting them. A lot of my new patterns start as commissions: the bunny trio, the sunflower and goldfinch, even, way back when, the bisons. But nobody ever phoned, e-mailed or stopped in our booth saying, "Do you ever do monkeys?"

It wasn't a new source photograph. I didn't find it in a stack of old National Geographics, wildlife calendars or WWF day planners.

And it's not like I have a long history with monkeys. The Wildwood Park Zoo in Marshfield did have a small troupe of squirrel monkeys in the seventies--just about the only animals they had that weren't native to Wisconsin or a contiguous state--but I only saw them a few times, say, once a year at the altar boy/choir girl picnic.

I'm not even sure what kind of monkey it is. It's got a prehensile tail on one end and a banana on the other, so I'm guessing it's a new world variety. Though come to think of it, weren't bananas introduced to Central America from Asia?

All I know is, one day I got bored painting the same old patterns on tall mugs and thought, What can I do that's new? I may have even asked the other potters at Club Mud, and somebody--possibly my subconscious--said How about a monkey?

So I painted one. Liked it so much I kept the mug. Tried it on a few other items, dessert plates, small serving bowls, the occasional pie plate. They're not in terrific demand like the bunnies (though one young woman in Southern Oregon now has three), but they sell steadily enough...

To keep me in the monkey business.