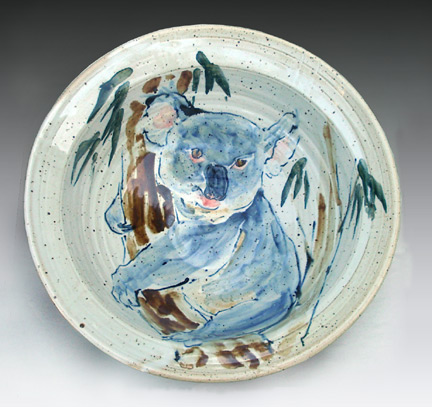 I wore a clip-on koala on my collar through four years of college. It's amazing what you can get away with in a liberal arts environment.

I didn't originate the idea; the wackily creative kids I hung out with in High School--think Glee scripted by Monty Python--started the fad, each naming his koala after his favorite artist. There was Leo (nardo da Vinci), Ludwig (von Beethoven), and my favorite, Rembrandt. I don't know what Rob and Mark did with their koalas in college. I started a weekly comic strip.

It was three panels, featured me perpetrating puns and Rembrandt doing sight gags and shout-outs to friends. It ran three years, got me a job as an editorial cartoonist at the diocesan weekly newspaper, and led to one unit of student housing being named "Koala Hall."

Like I said, only in a liberal arts setting.

I worked for the Viterbo College painting crew the summer after my sophomore year, spackling tack holes and repainting dorm rooms, as well as fixing up the motley collection of subdivided houses and apartment buildings the college maintained as supplemental student housing until they got around to knocking it down and building something on the lots.

We painters were a mixed lot of misfits, slackers and international students who didn't have a green card to get a real job. Like every summer house-painting crew since time immemorial, we quickly learned to always paint on the shady side of the house, especially in Wisconsin's hot, humid summers.

One morning, up on the ladder painting the second floor of 806 S. 9th Street, I painted Rembrandt on the right front panel. When I took a break, Godfried, next up the ladder, painted around the koala instead of over it. Then the sun came over the top of Murphy Center and we moved around to the shady side for the day. 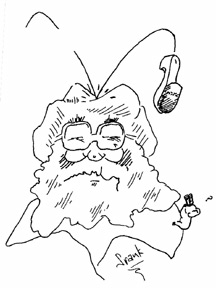 The next morning I painted over the picture and was continuing to finish the third floor when "Hey! Pu' tha' bahk!" came word from Viterbo's Irish-American business manager, whose office overlooked our job site.

Far be it from me to argue with the man who signed my paycheck, so when I went back up to paint the window frames--as an art major, I was pretty much the only one trusted to paint trim--I took along a couple of artist's brushes and painted the street number on the left side of the façade, and a two-foot-high cartoon koala on the right. "Koala Hall" was born, much to the annoyance of our student newspaper's other cartoonist, Milktoast, who actually lived there. He got even, though...

Considering my long history with koalas, I was delighted when the Portland Zoo actually got a pair of them to go with the emus and wallabies in their Australian exhibit. I've never gotten a very good look at them, though. They spend most of the day curled up in the trees, snoozing, unlike their cousins in the San Diego Zoo. Those fellows once staged a daring daylight escape--into the eucalyptus trees right outside of their enclosure, proving that the leaves really are greener on the other side of the fence.

My koalas, wide-eyed or snoozing, can be found on vases, serving bowls, pastas and the occasional pie plate. Maybe I'll even put a few on tall mugs.

For koala tea, of course.