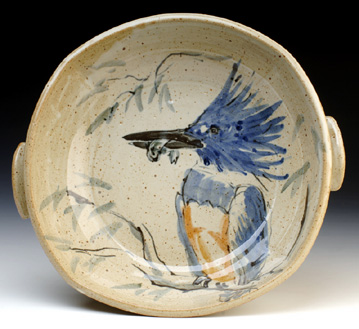 My undergraduate pottery professor lived over the river and through the woods: Across the Mississippi River from La Crosse, and down through the winding back roads of Southeastern Minnesota, across a cattle guard, through a cornfield and finally back to his little place. He had a wood-fired salt kiln, fired with sawmill slab and a little #2 fuel oil to bump it over the last couple of cones.

When I started getting serious about pottery my senior year and afterwards, I started going down to help fire occasionally. It was a single-firing operation, no bisque fire, so he'd start the beast on big logs around midnight, slow warming the raw pots. Around 6 am it was time to start stoking regularly, and by the time I and the other students arrived in mid-afternoon he was ready to drop, so we took over. By suppertime we were stoking constantly, and had to rake coals out of the firebox, or else the temperature wouldn't climb. We used elm and oak coals to boil brats in beer, and once attempted to barbeque a turkey over them. (Unsuccessfully. His wife finally had to take the pallid thing back into the house and introduce it to a hot oven. Fortunately, it wasn't stuffed, so we got supper before midnight.)

But as much fun as the smoke, sweat and cameraderie were (not to mention six-foot flames shooting out of the chimney), some of my favorite memories come from the drive down to Brownsville. The road meandered over bluffs and through coulees, stream-cut valleys in the soft limestone plateau. There was one stretch where the road paralleled the stream, and nearly every time I passed by there was a kingfisher perched on the telephone line, watching the riffles in the stream. Once, I was lucky enough to see him spy something beneath. He pitched forward, wings folded back to the barest minimum, and dropped like a bomb, bill first into the sparkling water. A few moments later he rose again, wings trailing glittering spray, a shiner of some sort in his beak. It was a one-of-a-kind, truly magical moment.

My kingfisher pots are pretty one-of-a-kind, too. I paint him on pasta bowls, serving bowls, and the occasional square baker. Where he's been known to make quite a splash...