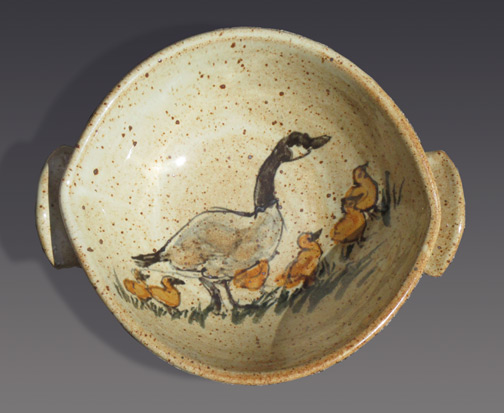 When I was in graduate school, the Ceramics studio was on the far side of the Millrace, a pretty little stream that, historically, diverted water from the Willamette River to power several grist and sawmills. By 1985, it was strictly decorative, meandering through downtown Eugene, populated by ducks, flailing UO students trying to navigate the canoes they'd rented from the Outdoor Program shed nestled down by the water, and geese.

I'm not sure whether they were actually migratory; between the students with day-old bread from the bakery outlet (Do not do this! Too much protein and carbohydrates may lead to a condition called angel wing) and feeding stations set up on the far side of the stream next to the Physical Plant buildings, I think they knew when they had a good thing. They stayed around, raising broods of fluffy yellow-grey goslings every spring, and grazing on the fresh green grass in the pretty little park between the Millrace and Franklin Boulevard.

A park that was seriously under-utilized; at least, I never saw anyone lying out on the grass in sunny weather. I think it may have had something to do with the grass/goose relationship.

As we live in north Eugene now, we get to see geese every time we drive past Delta Ponds. Flocks of them, including various sizes of youngsters in spring and summer, swarming out of the park to graze on the grassy medians and trapped meadows amid the on and off-ramps of Beltline and Delta Highway. Surprisingly few wind up squashed on the roadway, possibly because drivers, like us, slow down and say Awww! when we see goslings.

Now that it's fall, and flocks of Geese are skeining up overhead, I've decided it's time to try painting a few on pottery. Small bakers, so far, with pie plates, desserts and other baking dishes to come.

Get them, before they fly away.