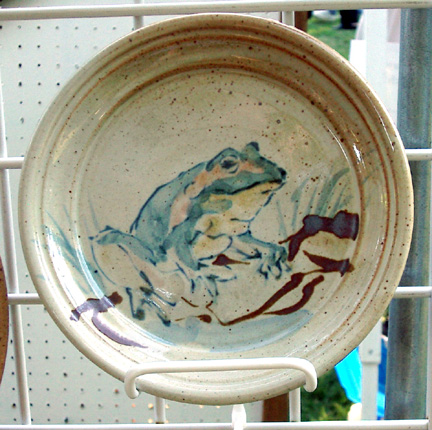 There were deep ditches along our road, back on the farm in Wisconsin. This could be a problem in winter--you did not want to slide in on an icy morning--but great fun in spring and summer. Water would accumulate, you see, particularly around the culverts, giving rise to cattails, dragonflies, water skimmers...

And frogs. Leopard frogs, mostly, but there was also the occasional bullfrog. We'd watch for their pointy little noses to pop above the water, try to catch them with little success. They were much faster than we were.

I still like to catch frogs, but now I catch them on my pottery. Soup bowls, most often, though they also pop up on dessert and dinner plates, tall mugs and tumblers, the occasional French butter dish.

What can I say? They make me hoppy.