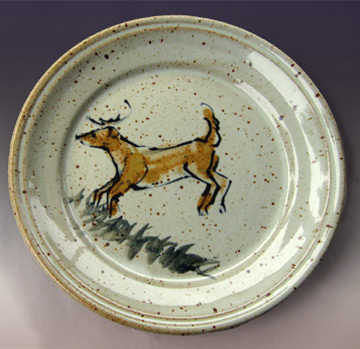 Thanksgiving week in Wisconsin, everything pretty much grinds to a halt. Nobody's in the fields, nobody's in town at the Co-op or the feed mill. Pretty much every young male--and no small number of females--over the age of twelve or thirteen is out of school, with his or her father's permission. It's deer hunting season.

I participated in the frenzy for two years before chronic tendinitis in my ankle gave me an excuse to forsake miles of walking through swamp and brush and tag alder thicket in favor of someplace warm with books nearby. I never filled my tag.

I only ever had one chance, but it was a beauty. My brothers flushed an eight-point white-tail buck and two big does from a neighbor's woodlot. I was posted in ours, and the three of them came sailing along the fence line in front of me, like cut-outs in a shooting gallery.

Had a clear shot, and emptied the magazine at him. Never even turned a hair. I later figured out that, though I had the front sight on his shoulder, it wasn't lined up with the rear sight at all, so I sailed six 12-gauge slugs over his back and into Arno Miller's hayfield. It's called buck fever.

Though I've long since stopped hunting, I still get excited at the sight of deer, even the little black-tails we see along the back roads here in Oregon. (And occasionally right in town. The south hills of Eugene are heavily wooded with lots of tasty shrubbery. One time a doe wandered all the way down Chambers Street and wound up lost in our thoroughly urban little cul-de-sac. We shooed her out and back in the right direction, but I still remember fondly the sight of Bambi with my breakfast.)

These days I capture deer with brush and overglazes, on dinner and dessert plates, stew mugs, casseroles and bakers, pitchers, platters and cookie jars. You can bag your own for just a few bucks.