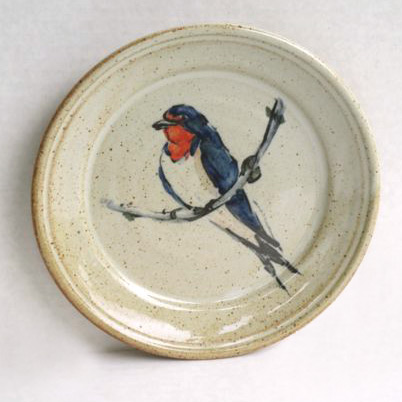 One of my favorite memories as a child is of my father taking me down to the end of the barn. He lifted me up shoulder high, so I could peer over the edge of a block of two-by-four, nailed to the ceiling beam of our 1917-vintage cow barn. There on the block, in a little mud-daubed nest, were baby barn swallows, wide-mouthed and squawking for mama to come feed them.

He only held me there for a moment before he put me down again, and only just the once. He said I shouldn't pester the birds; barn swallows catch mosquitoes, and flies that bit the cows and made them fuss. We wouldn't want to scare them away.

I never knew who nailed that bit of wood up in the first place, Dad or maybe his father years before. But he always kept the half-door open when spring and summer came around, and we had barn swallows nesting there until we lost the barn in a fire when I was 13.

I miss barn swallows. The green cliff swallows we have here in Oregon are pretty enough, especially on the wing, and it's fun to hear the babies nesting in the chimney above our fireplace. (Fortunately, we never build a fire, and the cats don't really know what the noise is, or I suspect they'd be trying to claw their way through the glass fire doors.)

But green swallows don't have the handsome red bib, the iridescent blue back, the swallow-tail that made Barn Swallows look like little tuxedoed dandies lined up on the telephone wire.

So I paint them on pottery: pie plates, desserts, tall mugs, pitchers. Sometimes even cookie jars, which sit on the highest shelf in my booth, where a dad will have to hold his toddler way up at shoulder height, to get a closer look.