Is this pottery lead-free?
Yes.

There's no lead in this is there?
Nope.

Do you use lead in your glazes?
God forbid.
Seriously, though... Although lead is one of the most reliable of glaze fluxes at earthenware temperatures (most of the diner and cafeteria ware you've used all your life is lead-glazed), it simply isn't useful in stoneware. At the high temperatures to which stoneware is fired, lead volatilizes and goes up the chimney as vapor. There just isn't any in there. Thanks for asking though.

Can you put these in the microwave?
Yes. Our pottery is oven and microwave safe, and in fact the design of our soup bowls is particularly microwave friendly, as the flared rim doesn't heat up after your soup/oatmeal/leftovers are nicely warm.

Can you put these in the oven?
Yes to that question too. I usually suggest, though it's not absolutely necessary, that you pre-heat them with the oven and add about five minutes to your baking time.

This pottery doesn't look off-center...
Off-Center refers to the potter, not the pottery. 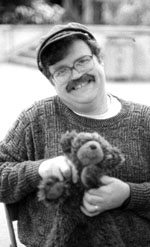 What's with the bears?
Well, the sitter cancelled at the last moment... Actually, we started bringing teddy bears to our first Holiday Market. Sales were very slow, and it was nice to have someone to clutch besides each other, especially someone who didn't bruise easily. Since then we've discovered that bears distract crying children, attract child-like grown-ups, and generally make the process of meeting customers and selling art a lot more fun. We're actually both very shy, so the bears make introductions. In fact, we'd call them the unsung heroes of Off Center Ceramics, except that they now have their own song.

Are you both potters?
Frank is. Denise sometimes helps with assembling and glazing, but she's really a Braille transcriber and Papermaker. She makes note sheets, cards and journals using recycled Braille paper stock and natural materials like yucca and daffodil leaves, lily and iris stalks, blossoms, rose petals, and a wild variety of grasses. She sells her work at our Saturday Market booth under the name Pulp Romances.

Do you teach classes?
Not anymore. I've taught a Pottery and Ceramic Sculpture classes at the University of Oregon's EMU Craft Center, in the past, but haven't anything scheduled currently. I might consider teaching at Maude Kerns Art Center, but haven't approached them to arrange anything. Keep asking. Denise teaches Papermaking at the Craft Center pretty much every term.

Do you make all these pots yourself?
Absolutely. Well, Denise helps with dragon toes... I throw them by hand on the potter's wheel (even the dragons and banks), then alter, assemble add handles or wings or whatever when they're leather hard. No molds are used for anything. After bisque firing, I glaze and hand-paint everything. I even use brushes I make myself. I don't mix my own clay, though.

What kind of clay is this?
For many years, I used a commercial cone 10 stoneware clay manufactured by Seattle Pottery called Pine Lake White. About two years ago, it started spalling and spitting, popping out chips after the bisque firing or, worse, in the glaze kiln, where they'd stick in the glaze, leaving bare craters. Since complaining didn't make it better, I changed clay suppliers and clay bodies, and am now using Clay Art Center of Tacoma's DWS, which I think is short for Dakota White Stoneware. Like the previous clay body, it's cement gray in reduction, blushing toasty brown where unglazed. It also iron spots nicely. As stoneware, it's vitreous and water-proof, even where unglazed. I order a ton at a time, delivered to my carport on a pallet from a big truck with an incredibly patient driver. (He has to be, to back into my driveway from busy River Road.) Even recycling scrap, I go through about six orders a year.

Where do you get your glazes?
I mix them myself from traditional ceramic minerals: feldspars, clay, silica, whiting, dolomite. The overglaze colors come from oxides and carbonates of cobalt, chrome and iron; a titanium/iron mineral called rutile, and a couple of commercial ceramic red and black stains, mixed one-to-one by volume with Gerstley Borate.

Did you take sumi-e painting classes?
Actually, no. I make this all up. The only "official" sumi technique I know is painting bamboo. Denise took a class in Chinese brush painting and taught me that trick.

What the heck is that round thing?
Is it a chip? A glaze flaw? A secret symbol of the Knights Templar? (Okay, nobody's asked the last one, though I had hopes during the Da Vinci Code frenzy...)

Actually, it's my chop, the way I sign my pots. Although a lot of West Coast artists sign their ware, either with scribing needle or brush and stains, I come from a different background. Back in the midwest where I learned pottery, we were heavily influenced by Japanese pottery, as interpreted by the Bernard Leach/Warren Mackenzie/Minnesota potter tradition. As such, we all signed our pots with a stamp; in fact, the first assignment in my first pottery class was to make our signature stamp. Mine is a very stylized lowercase "f" in a circle, adapted from the signature I was using for cartoons in the college newspaper. I've long since traded in my Rapidograph set for handmade brushes, but I still use the same stamp.

What are you doing here?
This used to be Where's Frank? because for all of my Saturday Market career, I hosted a two-hour folk music show on local NPR affiliate KLCC. The Saturday Cafe featured folk, acoustic and singer/songwriter music, folk calendar information for western and central Oregon, and frequent interviews with touring musicians. It was great fun to produce, but always a struggle to balance radio with Market and other out-of-town art fairs, so after 25 years, I decided it was time to retire from weekly radio. On March 28, 2015 I broadcast my last Saturday Cafe. You can see pictures here.

Check out all the bears...