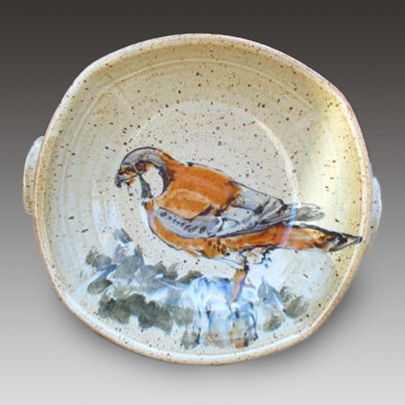 Earlier this summer, I got a really marvelous commission, an eight-place table setting for a customer from northern Florida. The best part? He sent me a two-page list of birds and animals from that part of the world with the instruction, Different pattern on each. Surprise us.

Glazing that set was easily one of the most fun things I did all summer. To begin with, there were so many new creatures: mockingbird, soft-shelled turtle, anhinga (aka Snakebird, kinda like a cormorant in formal dress), black-bellied whistling duck. I kid you not. Others were familiar, but I'd never thought to paint them: snipe, bobcat, river otter, pileated woodpecker, kestrel.

I particularly enjoyed the kestrel; I used to see them all the time when I worked for Slippery Bank Pottery. I made pots through the bisque stage at my studio at the UO Craft Center, then delivered them and picked up more clay every two weeks.

I'd take the back roads from Eugene to Cheshire to deliver hummingbird feeders or egg separators or spoon rests, and watch for waterfowl at Fern Ridge Reservoir, animals or birds in the fence rows. I saw a lot of sparrow hawks--kestrels--mostly perched on telephone lines or hovering over the stubble fields hunting for prey. It's fascinating to watch: they don't soar like a hawk or buzzard, more surf the wind like a kite. They're also dapper little birds, like a scaled-down falcon in cinnamon and blue-grey with a striking black on white eye band.

The kestrel plate I painted for the Florida set turned out so well that I decided to make it a regular pattern. I've only done dinner plates and squared bakers so far, but the notion to do more is hovering in my mind like a little hawk floating over the stubble of memory.