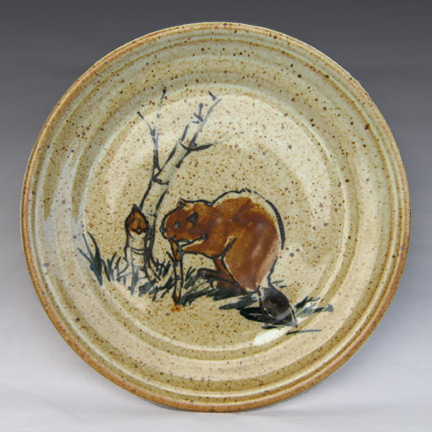 I live in the Oregon. The Beaver State.

Seriously, it's like Wisconsin is the Badger State, except we really have them. (Wisconsin was actually named for drift miners from Cornwall, brought to mine lead from shallow bores, and nicknamed "badgers.")

I've seen beaver dens on Amazon Creek and the Willamette River, big cottonwood trees felled on the shores of Delta Ponds, right next to Valley River Mall. There was a period when the Eugene Water and Electric Board was replanting the trees in their landscaping every other year--urban renewal on the banks of the Willamette was feeding Castor canadensis. In dry eastern Oregon, they're famous for damming irrigation ditches, though here on the wet west side, they forsake dams and domed lodges in favor of tunneling into the stream banks.

So why did it take me 18 years to finally paint beavers on pots?

The University of Oregon Ducks, that is. You see, the Beaver is the mascot of rival Oregon State University, in Corvallis, and though I could give two hoots about college athletics, some part of me didn't want to risk fan reprisals.

But this winter I've been working on a project for my high school reunion, 35-year commemorative mugs. Since I did not want to be painting the school mascot (the Greenwood Indian, based on Cleveland's Chief Wahoo), I offered to paint any other animal my classmates wanted, provided it was native to Wisconsin.

So, no badgers (so far, at least), but I've painted a lot of deer, bear, owls. And Beavers. Which are actually kinda fun to draw, so I'm tentatively adding them to my Off Center Ceramics patterns. For now, they're only on dessert plates and tall mugs.

But if I ever get accepted back into the Corvallis Fall Festival, I'm gonna paint them on everything.